Tobacco Control in E.U. and Greece 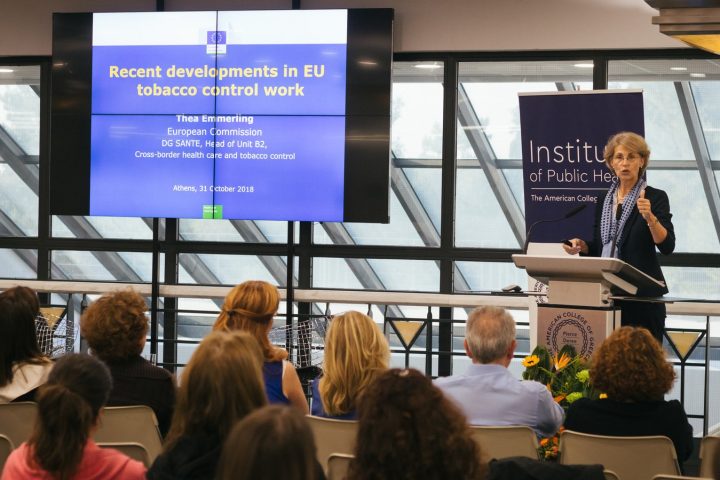 Ms. Thea Emmerling, Head of Cross-border Health Care and Tobacco Control work, DG SANTE of the European Commission, recently visited Athens after being invited by the Institute of Public Health and the Office of Public Affairs. Ms. Emmerling was the guest speaker of the “Tobacco Control in E.U. and Greece” event that took place at the ACG Campus, in collaboration with the SmokefreeGreece Initiative, Center of Excellence for Sustaianability, Office of Student Affairs and the Health & Wellness Center.

During her stay, Ms. Emmerling and the Director of the Institute of Public Health, Prof. Panagiotis Behrakis, had a fruitful meeting at the Greek Ministry of Health with the Head of the Directorate-General for Public Health and Life Quality, Ms Vassiliki Karaouli and the Head of Addictions’ Department, Mr Efstratios Skopelitis. The main subject of discussion at the meeting was the need for implementation and enforcement of the smoking ban by the Greek Government and possible ways of cooperation with the European Commission to optimize the procedure. The team of the SmokefreeGreece initiative welcomed Ms. Emmerling to the Institute of Public Health in Plaka, Athens, who shared with her some of the actions and efforts that have been made to prevent tobacco smoking among youth in Greece and on progress made by the Joint Action on Tobacco Control, a European project aiming to aid in the implementation of the tobacco products directive in EU member states, coordinated by the George D. Behrakis Research Lab of the Hellenic Cancer Society.

Pierce Students of A Gymnasium, prepared a special event where they presented to Ms Emmerling, Prof.Behrakis and their peers the activities of the Anti-Smoking Club from 2006 to the present, under the supervision of their teacher Ms Chrysoula Barabouti, including plays, photographic material from their participation in Student Conferences, Panhellenic and International Competitions, artistic creations (paintings, poems and collages) and videos that have been created and produced by members of their Club. 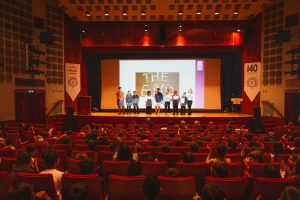 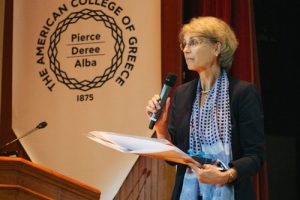 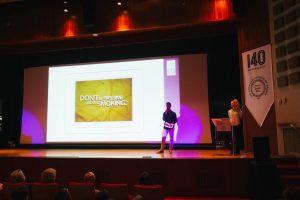 At the main event, that took place at the John S. Bailey Library of the Deree Campus, Prof. Panagiotis Behrakis, Coordinator of the SmokefreeGreece Initiative, underlined that enforcement of the smoking ban law is currently the most significant problem in tobacco control in Greece. According to research data presented by Prof. Behrakis during his speech, despite the lack of enforcement of the smoking ban law in public places, there has been  a notable reduction of cigarette consumption in Greece.

“The American College of Greece is planning to implement an innovative action in Greece by establishing a Smokefree campus, which will be based on the mutual collaboration of ACG students, faculty and staff”. 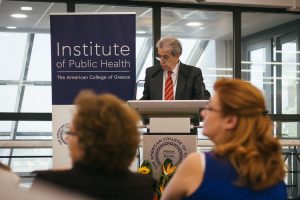 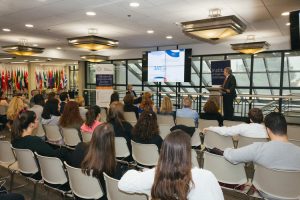 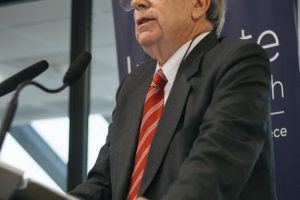 Ms.Emmerling presented the European Commission’s recent progress and priorities on tobacco control policies. She also personally expressed her concern on the effect of smoking, stating that tobacco is the only commercially available product that kills half of its users. The European Commission is currently reviewing EU member states’ smoking ban laws, in which the respective law of the Greek Government, introduced in 2009, was confirmed that it complies with all EC regulations, hence making it mandatory for Greek authorities to proceed with enforcement. Ms. Emmerling also raised the issue of tobacco illicit trade as an obstacle to tobacco control efforts, which will soon be strictly controlled by the implementation of the EU Tobacco Products Directive. Also very interesting, Ms. Emmerling shared how new EU policies, in specific, environmental policies, are indirectly driving tobacco control strategies through incorporating regulations to increase tobacco company accountability towards cigarette butt pollution. 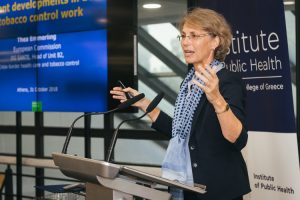 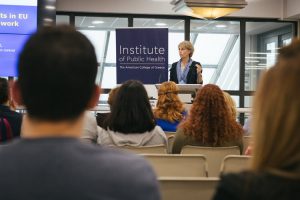 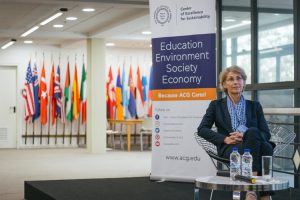 The event “Tobacco Control in E.U. and Greece” was coordinated by the ACG Vice President, Office of Public Affairs, Ms Claudia Carydis.

Special thanks to James Voutsas, Deree Student, for the photos. 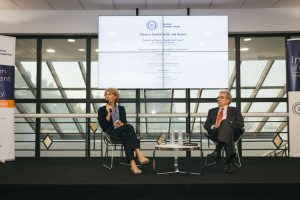 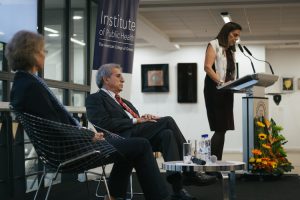 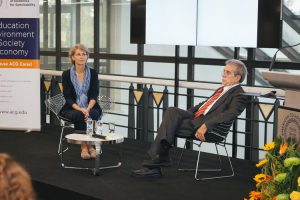 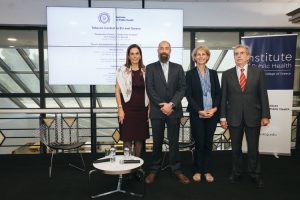