The socio-economic impact of reduced birth rates in Greece, along with their causes, challenges and solutions were at the center of the panel discussion organized by the ACG – Institute of Public Health in collaboration with the NGO HOPEgenesis and with the support of the ACG Office of Public Affairs, on Thursday, February 25, 2021.

The event featured Deputy Minister for Health, Zoe Rapti, UNESCO Goodwill Ambassador and Founder/President of “ELPIDA Friends’ Association of Children with cancer” and “Marianna V. Vardinoyannis Foundation”, Marianna Vardinoyannis, Founder/President NGO HOPEgenesis, Stephanos Chandakas and the Dean of the School of Business & Economics of The American College of Greece Dr. Annie Triantafyllou. The discussion was moderated by Professor Panagiotis Behrakis, Director of the Institute of Public Health of The American College of Greece. 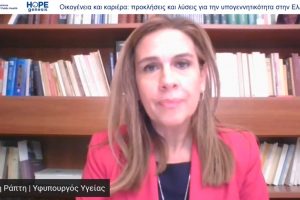 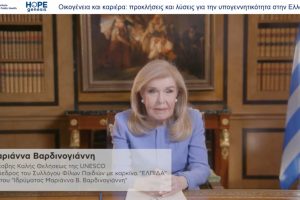 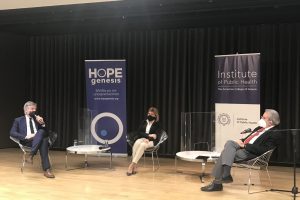 The panel speakers agreed that the demographic problem undermines the future of Greece, has serious consequences for economic development and endangers prosperity. Further, the current health crisis exacerbates the problem, as it increases insecurity and makes starting a family even more challenging. Economic hardship acts as a deterrent to childbearing plans for a large portion of the population, while it has also led to the migration of many couples of reproductive age. Deputy Minister Zoe Rapti mentioned that by 2050 the country’s population will have decreased to about 9 million, projecting that 35% of the population will be aged 65 and over, and by 2080 to 7.8 million, burdening significantly the social security system. Zoe Rapti elaborated on the government’s incentives to reverse the trend.

Women have taken on multiple roles to adapt to changes in society today, as explained by Mrs Vardinogiannis, whereas the lack of support in their work environment and limited access to health services for people living in remote areas, all contribute to low birth rates.

Stefanos Chandakas noted that the family should be approached by society as a pole of growth and development and in the absence of measures the future cost for the country will be much higher.

Dr. Triantafyllou stressed that social stability enhances financial security and vice versa and highlighted the role of partnerships between the public and private sectors in securing an innovative and flexible framework of support to young families.

You can watch the event in the following video (the event was held in greek):